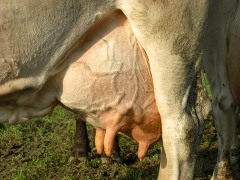 Organic cows are just as ill as conventional ones

Meat and dairy consumers believe that all the problems of livestock farming are solved by means of better feed and more run-out for the organic cows. So far, however, there have been hardly any scientific studies on animal health in organic farms.

Smaller studies in several countries have already indicated that the health of the organic cows is hardly better than that of the conventionally kept and fed animals. Nevertheless, this has never been the subject of a comprehensive study in German (or Swiss) stables.

This knowledge gap has now been closed for Germany. In this case the mastitis (uterine inflammation) and the lameness of the animals were examined.

Mastitis is a major problem with all dairy cows. By this disease alone, the dairy farmers pay about 10% of their income. That is why, for the agronomists, it was of particular interest to find out how the health of the so-called organic cows is in this regard. The result was sobering: Organic cows have as much mastitis as the conventionally kept animals (about one third of all cows were affected).

Where does it come from? The modern breeding on machine suitability and simple milking has led to the fact that the closing muscles of the teats have become weaker and weaker. And their shape also makes it possible to penetrate pathogens much more easily into the udder. Also the organic cows must give as much milk as possible. In the study, the average was over 20 liters of milk per day, with peak values of up to 30 liters. Shortly after the birth of the calf the milk output is generally highest (up to about 60 liters daily). Such a performance is not to be achieved with organic cows with the right kind of feed alone (grass and hay). Although the organic cow feeds come from organic farming, it does not meet the ruminants' needs. 45 to 60 days before the birth of the next calf, the cows are constantly milked. During these 8 weeks before the birth of the next calf, the cows are "put dry". That means: no longer milked. Usually, they are given antibiotics in conventional posture, which not only help to prevent milk flow, but also prevent udder inflammation. This antibiotic treatment is used more cautiously in the production of organic milk, which is why inflammation of the highly stressed udder is more frequent. In Switzerland alone, approximately two tonnes of antibiotics are used for these udder treatments every year.