On 8.8.1993, a few ambitious young people laid the foundations for the first independent vegetarian club in Switzerland.

Milestones in the history of Swissveg

In 1968, Fredy Forster founded the Swiss Reform Youth (SRY). Young people got to know each other through the SRY and young vegetarians could get together for trips, meetings and other activities. The purpose of the SRY was to offer young vegetarians an environment where they could exchange ideas with like-minded people and have fun.

After the searching without success for a neutral vegetarian club to support, some reform youth leaders decided to establish their own adult society with the aim of providing vegetarians with a platform, but also to make the vegetarian lifestyle public and better known. 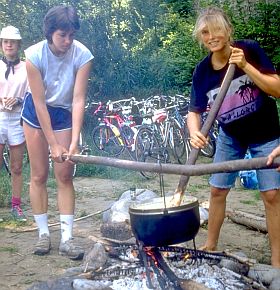 On 8.8.1993, the Swiss association for vegetarianism was officially founded in Sennwald SG. Before this, Andreas Läuffer's parents' home (Andreas was the last president of the SRY and the founding member of the SVV) was converted into the first "Vegi" office from where the activities under the leadership of Renato Pichler were carried out. 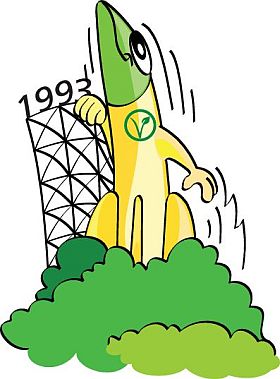 The V-label project started in 1996: The SVV began to accompany Migros's new Cornatur line at the launch and to certify all products with the V-label. Later, all Migros restaurants (more than 200 branches) were certified with the V-Label for several years. In addition to the controls, the training of chefs and employees was an important aspect of this work.

Meanwhile, the V-label has established itself nationally and internationally. The V-Label project is now coordinated worldwide by the Swissveg Secretariat. It enjoys the support of practically all European vegetarian associations. 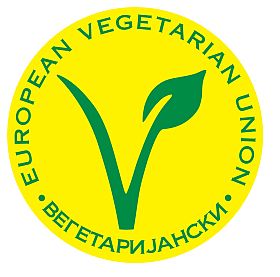 From the outset, the SVV has created informative publications on all aspects of the vegetarian way of life. Today, many different flyers and several brochures, glues, cards, posters etc. are available at the Swissveg Secretariat. Hundreds of thousands of people were thus already directly informed. 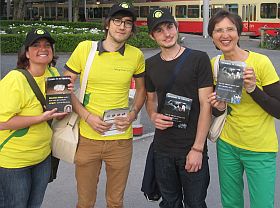 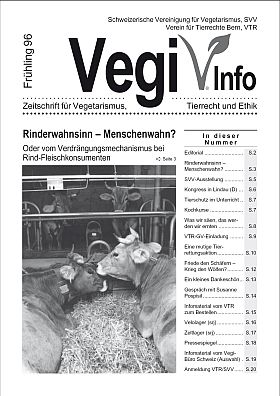 In 1996, www.vegetarismus.ch went online! At this time, the Internet was somewhat of a rarity and the SVV homepage was one of the first German-speaking websites to champion the vegetarian diet. In addition to (now) www.swissveg.ch, Swissveg is still serving other websites on special topics:

www.vegi-basics.org: Basic page for a quick overview.
www.vegi-tag.ch: About the project vegetarian weekday
www.vegi-weihnachten.ch: Tips for a vegetarian Christmas
www.milchwerbung.ch: To correct deceitful milk advertising
www.govegan.ch: Introduction to all aspects of the vegan lifestyle
www.v-label.eu: About the V-Label
www.veganmania.ch: The Swiss website about the vegan street festival 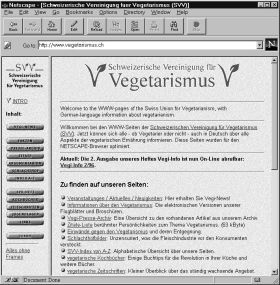 During the association's time in Sennwald, the idea came about to make the vegetarian diet tasty for everyone. Vegi-Service AG was established in 1997, which is now a leading producer of vegan meat and cheese alternatives not only in Switzerland, but also throughout Europe. The company is still managed today by the co-founders of the SVV and former members of the board, Katharina and Andreas Läuffer. 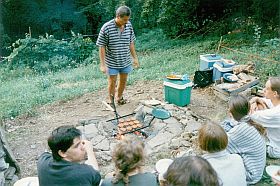 In 1998, Vegi-Info was translated into French for our readers in western Switzerland for the first time. Until 2003, the book was still printed in black and white on pre-printed cover, with 24 pages. 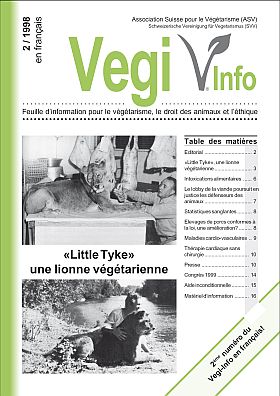 Over the years, the premises for the SVV and also the Vegi-Service AG in Sennwald became too small and so we had to look for new possibilities. In 2001, suitable premises were found in Neukirch-Egnach, TG which were large enough for an office, production facilities and also centrally located. For nine years, the SVV coordinated their work from here. 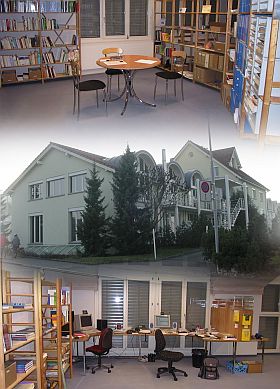 In 2001, the SVV concluded that the concepts of vegetarian and vegan are defined in laws relating to food. This means that from this point onwards, it is quite unlawful to declare a dish as a vegetarian if it contains any parts of slaughtered animals.

In 2007, the SVV was also a member of the Working Group of the Swiss Federal Office of Public Health which was to draw up a report on the vegetarian diet. Thanks to a great deal of persuasion and long negotiations, the SIA ensured that the official nutritional guidelines not only recognize the vegetarian diet as healthy, but also point out that vegetarians suffer less often from nutrition-related diseases. 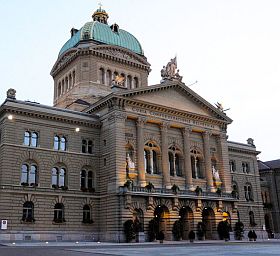 In 2003 an employee was hired for the first time to help in the office. Seven Swissveg employees are now working to coordinate the projects in German- and French-speaking Switzerland.

After the Secretariat of the European Vegetarian Union in the Swissveg office in 2005, work has to be coordinated internationally as well. In this way, Swissveg can support vegetarians and vegans all over Europe. For example, the text from the popular "Ecological Effects of Meat Consumption" brochure was translated into five languages ​​and spread throughout Europe, India and the USA. Our table "Climate kilometers and nutrition" has been translated into 7 languages. 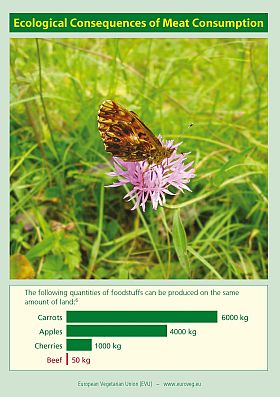 From 2004 onwards, the SVV was able to produce a colour printed verion of Vegi-Info for the first time. Meanwhile, the book has grown to 48 pages and has a print run of 12,000 copies (plus a French edition). 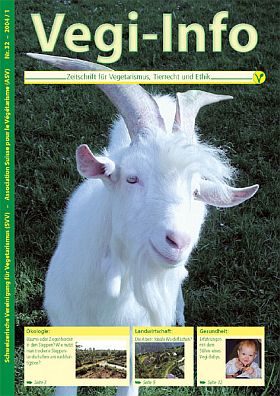 In order to cover all areas of vegetarian life, a Vegi snack bar was created in 2008 by the SVV. This means that good vegan food can be made available in open-air and other events as well as making it more well known. The snack van was later integrated into the Veeconomy and renamed to UNMEAT. 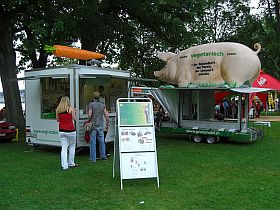 Since most of the SVV members are located in the Zurich area and the journey to Neukirch was relatively far, the SVV was looking for new premises near Zurich. In November 2010 the time had come and the big move to Winterthur took place, where Swissveg is now based. 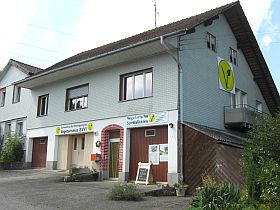 Due to its central location, the SVV was able to organize many more campaigns than before and even more interviews for media and students. Twice we hosted a free barbecue In our garden with over 100 guests.

In the spring of 2011, Veganmania Switzerland started: Swissveg organized the first and largest annual vegan street festival in Switzerland. As a result we are able to bring the vegan lifestyle closer to the general public.

In autumn, Swissveg launched the Vegi-Card, with which members can profit from great discounts from over 100 companies. 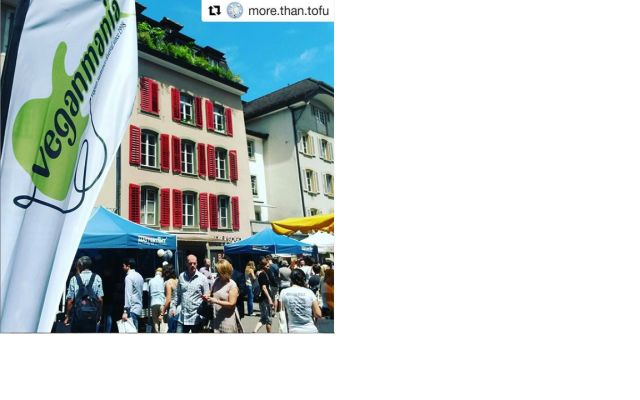 In the spring of 2014, the Swiss Association for Vegetarianism changed its name to Swissveg. The new name meets the spirit of the times and speaks even more clearly of all vegetarian orientations, which are contained in the vegetarianism concept. The two websites www.vegetarismus.ch and www.vegetarisme.ch were redirected to www.swissveg.ch.

On the occasion of World Vegan Month in November 2014, we launched the two "Go Vegan" brochures and prepared the corresponding website www.govegan.ch. The first edition covered 4,000 copies per brochure and the second one was printed with a circulation of 7'500 brochures. As the brochures were ordered at such a high rate, a third edition was printed with a circulation of 10'000 copies each! 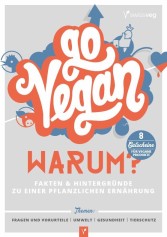 In 2015, Swissveg invested in meeting as many people as possible on the social media channels and informing them about these channels. Today, social media presence is an absolute must and our social media accounts were successful - soon our main account on Facebook has cracked the 10'000-Like threshold ! In addition, a Swissveg French Facebook account was set up for French-speaking Switzerland, and the Instagram account followed in March 2016. 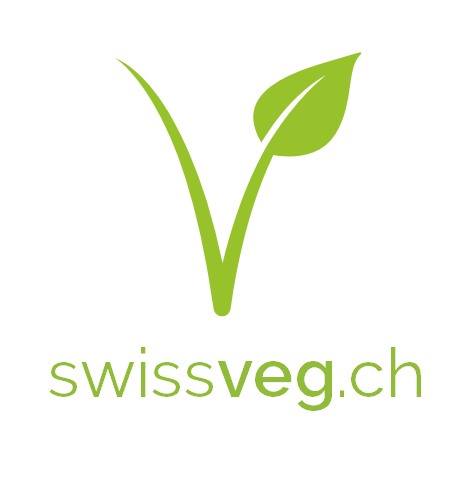 In 2016, coachings for restaurateurs started with a new concept and in cooperation with vegan rocks. This new project trains restaurateurs and / or canteen operators and shows them how to focus on sustainable (= plant-based) menus.

In order to reach even more people, we started large-scale campaigns in 2018, which you could also see on electronic billboards at train stations, petrol stations, buses, etc.

There is still much to do!

The work of Swissveg has played a major role in establishing the vegetarian diet in Switzerland. There is still a lot to do! This is especially true in restaurants where the vegetarian menu often has room for improvement and some restaurateurs are poorly informed. As a vegan it is also not yet possible to complete the federal training as a nutrition consultant, since it is obligatory to consume animal products. The meat-lobby's fictions are still spread about the production of meat and the keeping of the animals - there is a need here to educate!

There has been increasing focus on vegan nutrition during the last years. Some of the same prejudices against the ovo-lacto-vegetarian way of life that existed 20 years ago still have to be opposed today.

Swissveg wants to continue with its experience, its contacts and its possibilities to make life easier for all vegetarians and to present a counterpoint to the one-sided opinion of the powerful lobbyists. All of this is done by our small team in the office but is not possible without help. Every single vegetarian is necessary, so that we can reach these goals as a big community - because Swissveg is only what each individual contributes: You are Swissveg!

Only together we are strong. That is why Swissveg works with organizations around the world that have similar goals.

A sincere thanks to all those who have worked for Swissveg over the past years!

If you do not support the vegetarian movement yet, you can subscribe here:
I want to be a part of the change!

We have a separate inquiry form for media professionals.