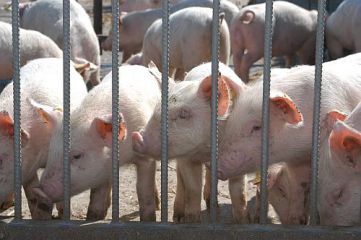 The majority of the meat consumed in Switzerland comes from pigs. Nevertheless, as a consumer you rarely get to see a live pig. How it looks in pigsties ist hardly known to meateaters.

Until 2011, Thomas Giger worked as a cantonal veterinarian of the rural canton of St. Gallen. His job was to ensure that the animal welfare law was followed in all stables. However, the lack of support from his superiors and other authorities made it impossible for him to do his work dutifully.

This unsustainable condition made him publicly say what the conditions are in many Swiss pigsties:

"At least 50 per cent of pig farmers violate the animal welfare law. They give the pigs no or only insufficient long straw »
(from: Observer 20/07 of 28 September 2007).

He estimates, when not counting the farms that receive additional subsidies for environmental services, it even affects 80 to 90 per cent of all pig farmers. He is not alone ith this opinion:

Is a dog worth more than a pig?

Mother pigs need straw to build their nest. But instead they often have to lie down with their piglets on a concrete pad and can not live their natural behavior. Long straw would offer additional employment opportunities for the intelligent animals. After all, pigs are at least as intelligent as dogs, but if one treats a dog the way the pigs are usually treated, one would rightly be upset and point to the animal welfare law. The pigs unfortunately have the misfortune that they are considered merely as "livestock" and thus they have no value other than their body weight.

It remains to be hoped that cantonal veterinarian Giger and his counterparts will continue to have the courage to publicly state what their superiors are trying to cover up. Although Mr Giger has been invited by the pig producers' association Suisseporcs to publicly withdraw his statement, he has not done so since he continues to be truthful.

Unfortunately, the situation of the pigs has not changed so far. Because they have to continue to be satisfied in many places throughout their lives with a bare concrete floor. This is made possible by the politicians who pay more attention to the business associations (Suisseporcs) than to the needs of the animals, and the consumers who buy the so produced meat thoughtlessly.